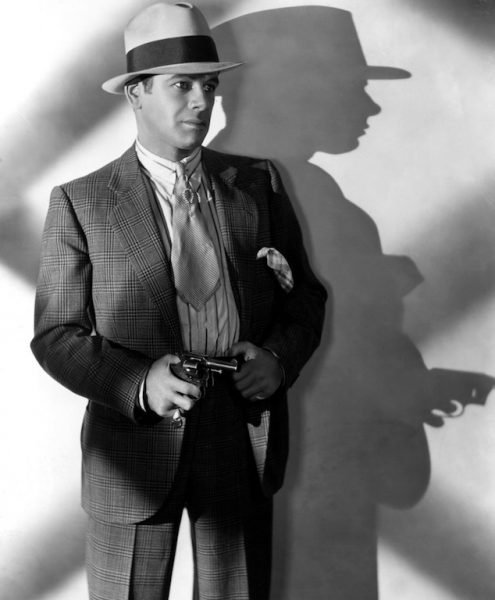 Paul Muni Becomes Scarface, George Raft is More Than a Dancer, Ann Dvorak Should be a Star, and the Howards Rebel. From 1932, it's Scarface.
Listen to my Classic Hollywood podcast, Vanguard of Hollywood , available everywhere you listen to podcasts!

Scarface  belongs to the holy trinity of gangster films for good reason.  With standout performances by Paul Muni, Ann Dvorak, and George Raft; and avant-garde story, script, and lighting, Scarface is timeless.

You can rent or purchase Scarface here on Amazon [aff. link].

The history behind Scarface is perhaps as intriguing as the film itself.   So let’s go through the plot of the film, then delve behind the scenes. 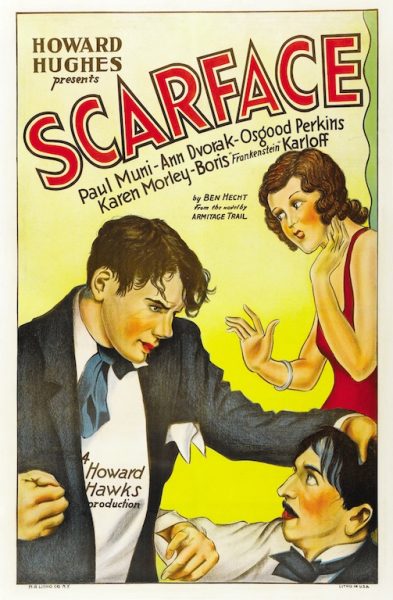 Scarface takes place in Prohibition Era Chicago.  Paul Muni is “Scarface” Tony Camonte.  Tony’s nickname comes from the “X” shaped scar on his left cheek, which extends from his jaw to his ear.  Tony does the dirty work for Chicago mob boss, Johnny Lovo (Osgood Perkins, father of Anthony).

Thanks to Tony, now Lovo’s only competing group for control of Chicago is the Irish mafia, run by rival boss O’Hara.  Lovo favors Tony, but it’s evident that Tony has ambitions of his own.  Tony begins disregarding Lovo’s instructions, inspired by a neon sign he spots.  The sign reads:

Tony and his right-hand man Guino, played by the debonair George Raft, begin hustling bar owners on the northside of the city, O’Hara’s territory, to buy bootleg liquor from Lovo.  Tony does this against Lovo’s orders, and it’s a huge dis to O’Hara.

Tony takes advantage of the mob war and kills just about everyone.  He’s really not that discerning.  After Tony gets a hold of the new “Tommy Gun,” or machine gun, he’s basically a maniac.  And when Tony finds out that Johnny Lovo is responsible for an attempted car attack/hit on him, Tony and Guino decide it’s time for Lovo to retire, and they kill him, too.

Now that he’s effectively wiped out all of O’Hara’s gang and he’s killed his old boss, Tony officially runs Chicago.  And with Lovo out of the picture, Tony takes the opportunity to make Lovo’s former mistress, Poppy (Karen Morely), his own.

Tony’s also got the hots for his sister, the beautiful Cesca.

When Tony comes back to Chicago after a trip with Poppy, he finds Cesca and Guino romantically together at Cesca’s new apartment.  So he shoots Guino on the spot, and kills him.  He finds out immediately after the murder from the hysterical Cesca that she and Guino had been secretly married while Tony was away.

But let’s be honest, that probably wouldn’t have changed Tony’s actions…

After murdering his best friend, Tony is a little dazed.  He’s holed up in his literally iron-clad apartment when all of the sudden, the place is surrounded by cops.

Cesca ratted him out after he murdered Guino.  But Cesca herself manages to sneak into Tony’s apartment before the police arrive, with the intent to kill her brother herself.

But she can’t bring herself to pull the trigger.  Brother and sister basically profess their love for each other, and their intent to fight the world together.  Then Cesca and Tony begin shooting back at the cops.  Tony laughs manically as he shoots his Tommy guns into the sea of policemen below.  It’s all fun and games for Tony until he notices that Cesca was hit by a stray bullet.  She dies in his arms.

Tony realizes his efforts to escape are futile when the police discover his hidden back door exit.  He pleas with them for mercy, and makes a run for it as soon as their guns are down, only to be shot by a police officer in the distance. He crumbles to the ground and dies after one last look at the neon sign that inspired his ambitious crime spree: 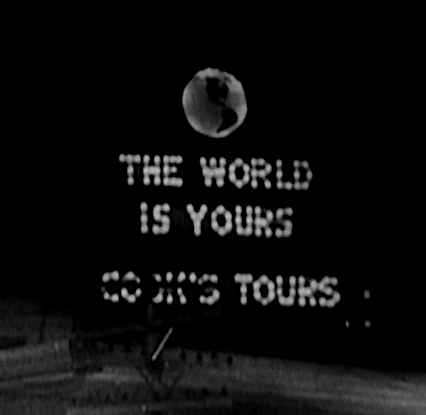 “The World is Yours.  Cook’s Tours”

Is the last thing we see before fade out. And that’s the end of the film.

Scarface was a 1929 novel by Armitage Trail.  It had been passed over by countless filmmakers and studios who considered the story too risky to film: Scarface was obviously based on the life of notorious mobster Al Capone.

And no one wanted to make that guy angry.

Furthermore, with the growing power of the “Hays Office,” Hollywood’s self-imposed regulator of what was morally acceptable to appear on film, the Scarface story–with its overt violence, sex, incest, and, some would argue glamorization of the mob—would be near impossible to get past the censors.

But Texas millionaire-turned filmmaker Howard Hughes was up for the challenge.  Hughes was not associated with any of the major studios, which gave him some freedom.  He courted another Hollywood independent, Howard Hawks, to direct Scarface.

At the time, Hughes was suing Hawks over an unrelated film dispute.  So…it seemed the chances of Hawks accepting Hughes’ Scarface proposition were slim.

But after the two men shared a game of golf, Hughes dropped the lawsuit, and Hawks committed to direct Scarface.

These two independent rebels, Howard Hawks and Howard Hughes, then set out to get Scarface made.

Hawks and Hughes were basically told right away that the film wasn’t going to happen.

Literally, the Hays Office, after reading the Scarface script, sent it right back to Howard Hughes with this little note:

“Under no circumstances is this film to be made…If you should be foolhardy enough to make Scarface, this office will make certain it is never released.”

But, Hughes, never one for censorship, was not deterred and instructed Hawks to:

“Screw the Hays Office.  Start the picture and make it as realistic, as exciting, as grisly as possible.”

And Hawks did just that.

As two outsiders, Hawks and Hughes had to get creative with the casting of Scarface.  There was no chance any of the major studios would lend these two independents any of the big stars. That meant the Scarface cast would have to be a bunch of unknowns.

Hawks was already familiar and impressed with Paul Muni’s work, and thought he’d make the perfect Tony Camonte.  And so the courting of Muni began.  The problem was, after his first two Hollywood films proved unsuccessful, Muni admitted defeat and went back to Broadway and the East Coast.

Believing that Hollywood and film stardom were not for him, Muni needed plenty of convincing before he agreed to go back to Hollywood.  It was actually the negotiations of his wife, the ever-stalwart Bella, that finally got Muni on board for Scarface and sealed the deal.

Muni was so convincing as a cold-hearted mobster, he even fooled the actual mob.  Not long after Scarface was released, Muni was on board the same ship as the legendary Mafioso Bugsy Siegel.

At one point during the voyage, Siegel’s henchmen came up to Muni and told him he was too convincing in Scarface to just be acting.  They then asked him what mob he was really with.

It’s also rumored that Al Capone, on whom “Scarface” Tony Camonte was based—and who Muni studied religiously for his portrayal of the character—actually owned a copy of Scarface because he enjoyed Muni’s performance so much.

The next not-Hollywood-name Hawks and Hughes signed on for Scarface was George Raft.  After Scarface, Raft became the archetype for the smooth, cool, sharply dressed mobster.  The coin toss, Raft’s signature move in the film, even became a classic piece of mobster stage business because Raft looked so cool doing it.

Raft grew up in New York alongside future real life mobsters, including Bugsy Siegel and Meyer Lansky, so he had some first hand inspiration for his role of Guino in Scarface.  But Raft himself was far from being a career actor or mobster when Hawks handpicked him for his role in Scarface.

George Raft, the quintessential mobster bad boy, began his career as a dancer.

According to Fred Astaire, Raft:

“did the fastest Charleston I ever saw.”

Take a look at the video above to see just what an amazing dancer George Raft was.  A special thanks to HarlowGold for putting together this amazing compilation.  Visit HarlowGold’s George Raft website here for more about this multi-talented performer. 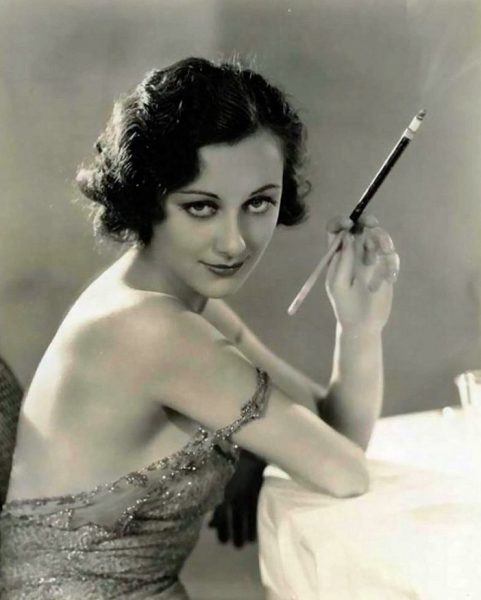 Ann Dvorak: The Should Be Star of Scarface

Ann Dvorak plays the critical role of Cesca Comante in the film.  Scarface made Ann a star.

But it should have.

Ann is such an obscure name today, even Dave Karger—who I usually consider to be one of the more detail-oriented TCM hosts—completely butchered her name when he introduced Scarface on Monday night.  (The “D” is silent, and it’s pronounced “Vor-shack.”) 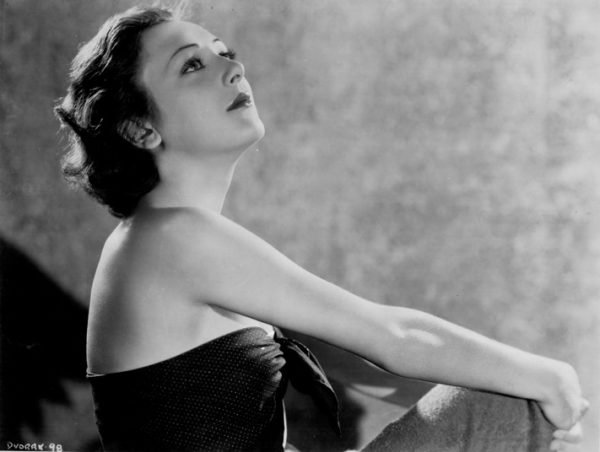 Like George Raft, before Scarface, Ann had been a hoofer, playing uncredited chorus girls and the like in several films.  She got the role of Cesca in Scarface by securing an invite to a Howard Hawks party through her good friend Karen Morely (Poppy in the film).

Ann came to the party in a stunning black dress, and convinced Hawks that she would be the perfect Cesca after sizing up George Raft on the dance floor.

Ann’s and George’s dance was the showstopping event of the party.  Hawks was so impressed, he not only gave Ann the role, he wrote a scene into Scarface that was basically a play by play of what Ann had geniusly manufactured at the party that evening.

Scarface was unfortunately one of the few noteworthy films in Ann’s career.  After contract disputes with Warner Brothers over their failure to offer her good roles, Ann finished her contract on suspension, moved to England with her husband, and drove an ambulance during WWII.  She officially retired from acting in 1951.

Ann was an exceptional woman.  It’s a shame she didn’t have more opportunities to showcase her great acting talent and unique charisma onscreen.

As promised by the Hays Office, Scarface experienced huge delays between completion of filming, and the fim’s actual release date.

Ultimately, it was a full year after filming wrapped before select audiences were permitted to view Scarface.  Some cities banned the film altogether, most likely under the influence of the Hays Office. 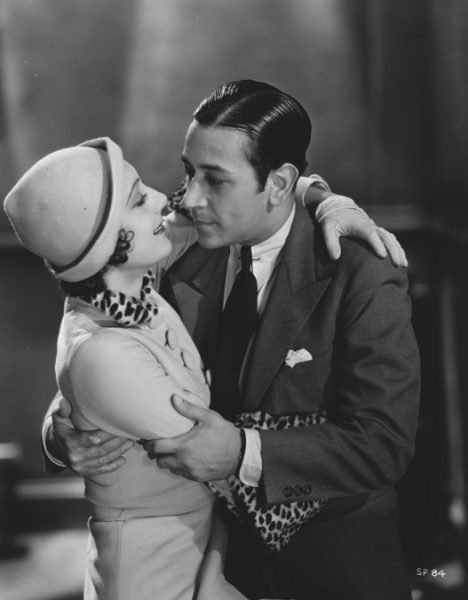 When you watch Scarface,  you’ll probably be surprised by the preachy little placards that run before the movie starts, condemning mobs and violence.

You’ll also wonder why there’s a totally random scene in the middle of the film where some newspapermen, government employees, and concerned citizens call all Americans to action, to put an end to the mafia.

The placards and this scene seem completely out of place, because they are: the Hays Office forced Hawks and Hughes to insert these elements into Scarface to make it crystal clear to the public that the film did not promote a life of crime.

Hawks and Hughes seethed over these required additions, but realized they had to include them if anyone at all was to see their masterpiece. 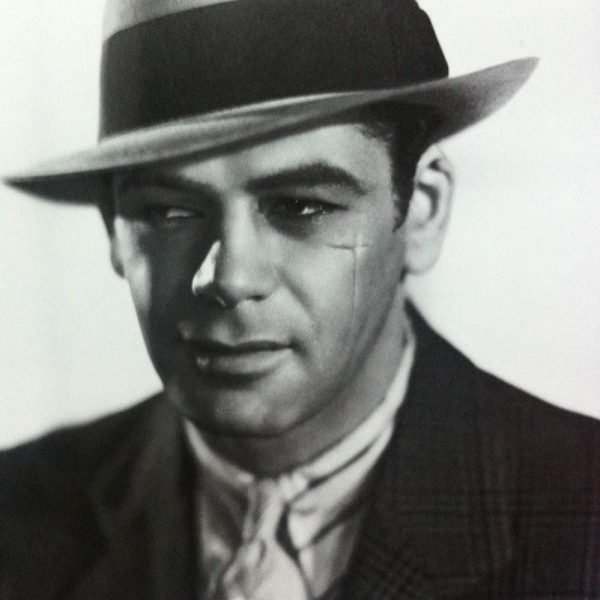 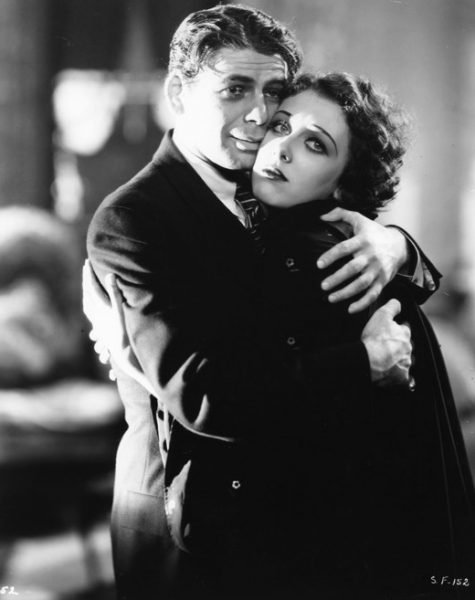 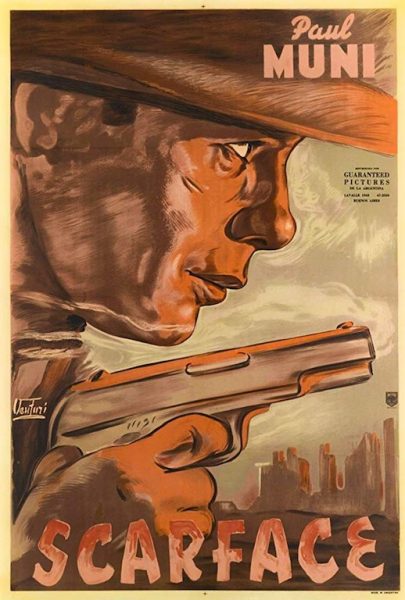 That's it for Scarface

Join me next week for more Paul Muni in Bordertown (1935). 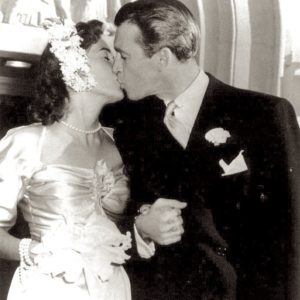 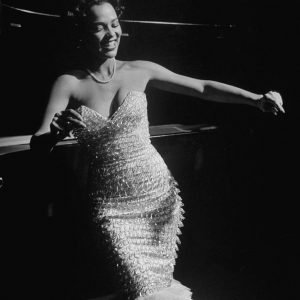 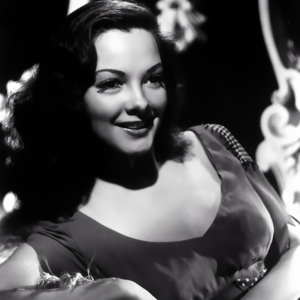 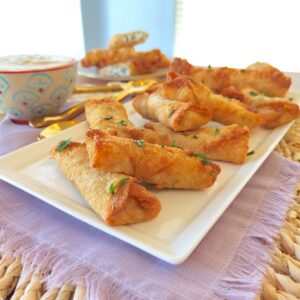 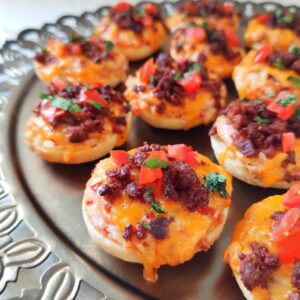 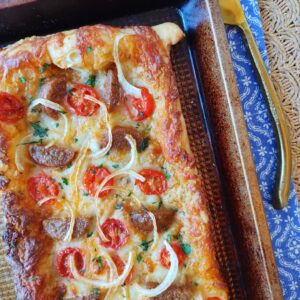