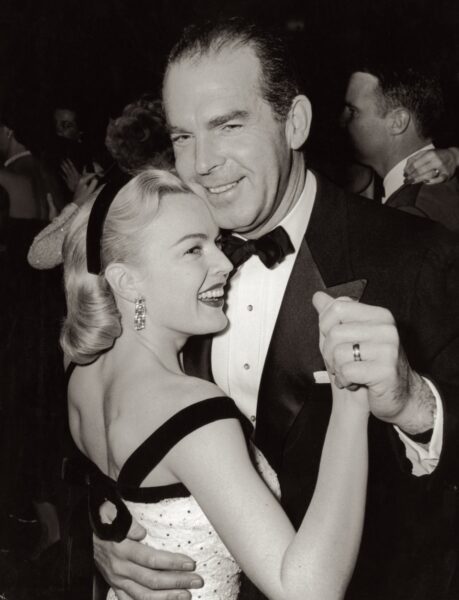 You can listen to the trivia questions and answers on the podcast.  But several listeners have asked for a written version of each question and answer.

So, from Fred MacMurray and June Haver, to Dennis Morgan, Q fever, & the mystery behind Alfalfa, here are the questions and answers to each day’s trivia.

Thanks for reading and listening, enjoy!

1. Which It’s a Wonderful Life actor was shot to death during an argument over a hunting dog?

The answer is Carl Switzer.

Switzer plays Freddy Othello in It’s a Wonderful Life, the young man who unsuccessfully tries to flirt with Mary Hatch at the high school dance, and then tries to sabotage George Bailey by opening up the dance floor to reveal a pool.

Carl Switzer is probably best known for playing Alfalfa in Hal Roach’s Our Gang, also known as The Little Rascals, between 1935-1940.  But Switzer’s film career waned in adulthood.  He became a dog breeder and a hunting guide to make ends meet.

One of the dogs Carl trained for the hunt was that of friend and business partner, Bud Stiltz.  31-year-old Carl was training Stiltz’s dog when the dog ran off after a bear.  Switzer couldn’t find the dog, and told Stiltz that the dog was lost.  This frustrated Stiltz, who demanded that Switzer either find the dog, or pay him the equivalent of the dog’s value.

Carl put adds in the newspapers and fliers around Los Angles, offering a reward to anyone who recovered Stilz’s dog.  The ads worked: the dog was soon found, and Carl paid the rescuer a $50 finders fee.

But it irked Carl that he should be out $50 over a dog he didn’t own.  Carl decided that, since the dog belonged to Bud Stiltz, it was Bud Stiltz who should pay the finders fee.  In a drunken state, Carl and a friend crashed Stiltz’s home, demanding to be reimbursed the $50.  Stiltz refused, and violence ensued.

There are differing accounts as to what happened next.  We do know that Carl and his friend smashed a glass clock over Stiltz’s head.

Then Stiltz retrieved a .38 caliber pistol.

A shot was fired into the ceiling, perhaps accidentally.  No one was seriously injured from the first shot, but a bullet fragment did hit Stiltz’s stepson, Tom Corrigan, who witnessed the escalating violence.

The Death of Carl Switzer

Another shot was fired.  It hit Switzer fatally in the groin, and caused massive internal bleeding.  Carl Switzer died on the way to the hospital.

Bud Stiltz testified in court that he shot Switzer in self-defense.  Despite an earlier perjury conviction, Stiltz’s testimony was found truthful, and he was not convicted of murder.

Surprisingly, Stiltz’s step son, Tom Corrigan, was not asked to testify.  But Corrigan’s version of what happened differed greatly from his step father’s.

Corrigan remembered that Switzer and his friend had decided to leave after the first shot was fired, and that Stiltz fired the second shot as Switzer was leaving.  According to Corrigan, his step father didn’t need to fire that second, fatal bullet. 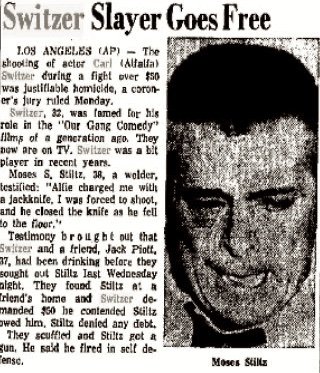 As recently as 2001, Tom Corrigan held that the death of Carl Switzer was “more like murder” than self-defense.

Whatever the truth of the circumstances, the premature death of Carl Switzer is among the greatest of Hollywood’s niche tragedies.

2. What actor was an accomplished saxophonist and starred in a Christmas film with Beulah Bondi?

The answer is Fred MacMurray.  And the film is Remember the Night (1940).

Fred MacMurray was a talented musician.  His father was an accomplished violinist, and ensured that Fred learned to play a variety of instruments, including the saxophone, piano and the banjo.

But for Fred, it was the saxophone that became a passion.

The saxophone also prompted the courtship of Fred and his second wife, actress June Haver.

After the tragic loss of Fred’s first wife, Lillian Lamont, to cancer (some sources say a heart ailment), Fred didn’t think he’d marry again.  John Wayne invited Fred to an extravagant party, hoping it would help lift his friend’s spirits.  Fred reluctantly agreed to go, but opted to bring his saxophone instead of a date.  As Fred saw it, he could play sax with the band all night, rather than socialize with the other party guests.

But then June Haver spotted Fred on the bandstand.

June, the sunny, singing and dancing blonde heir apparent to Betty Grable at Fox, was, like Fred, a reluctant party guest.

June had just recently returned to Hollywood after completing eight months in a convent in Kansas, where she’d planned to spend the rest of her days following the unexpected death of her fiancé.  Though June ultimately left convent life, she, again like Fred, didn’t see marriage in her future.

But that all changed at John Wayne’s party.  As June later recalled of her first evening with Fred:

“I’d known Fred a little…and I knew it was unusual for him to perform…every time [my dance partner and I] passed by the band, I tried to make him laugh—something no one can do [when] playing the sax.”

Fred clearly appreciated June’s efforts: when it came time to sit down for dinner, he asked if he could eat with her.  According to June, she knew right away that Fred was the one.  And Fred must have known too, for the very next morning, he arrived at June’s apartment to fix a plumbing problem she’d casually mentioned the previous night.  As June later shared:

“The next thing I knew, there he was, lying on his back on the bathroom floor, working on those pipes.”

True love indeed.  The MacMurrays were married in 1954, and remained married for nearly forty years, until Fred’s death in 1991. 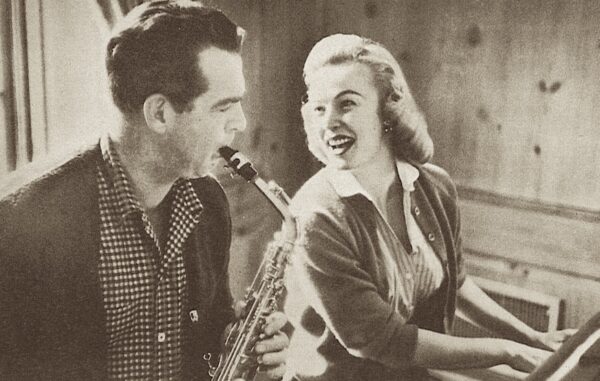 And their happiness can be traced back to Fred MacMurray’s skills on the saxophone.

3. What Christmas film about hidden identity and cooking starred an actor who was a happily married father of two before becoming one of Warner Bros. most popular stars of the 1940s?

The answer is 1945’s Christmas in Connecticut.  And the actor is the underrated Dennis Morgan.

Dennis worked in Hollywood for five years before achieving his big break in 1940’s Kitty Foyle.

The Wisconsin native married his high school sweetheart, Lillian Vedder, in 1933, after graduating from Carroll College.  With his beautiful tenor voice, Dennis’ post-college career included singing in light operas and work at a Milwaukee radio station before joining Vernon Buck’s Orchestra at The Palmer House in Chicago.  Dennis’ son Stanley and daughter Kristin were born in 1934 and 1937, respectively.

Between their births, Hollywood came calling.

The Morgan Family in Hollywood

After signing with MGM in 1935, Dennis and his budget-conscious family drove out to Hollywood in an old Packard.  But it would be a full five years before Dennis Morgan achieved the recognition he deserved in Kitty Foyle (1940).  As columnist Sidney Skolsky wrote of Dennis’ big break:

“After he was seen in Kitty Foyle, the fans took care of the rest.  His fan mail at the studio is larger than even that of Errol Flynn.  The fans howl for him.  He’s 6 feet 2 inches tall, weighs 175 pounds, has blue eyes and brown curly hair and a smile that sets him with the girls.”

He may have been Hollywood’s newest hearththrob, but Dennis Morgan was still a family man, and welcomed a third child, son James, in 1943.

It wasn’t easy balancing his Hollywood career and family life.  As Dennis related in an interview at the prime of his career:

“It’s not the easiest thing in the world to be a success in Hollywood and still be the ordinary husband and father.”

But succeed he did.  Despite the fame and riches of Hollywood, Dennis Morgan remained a faithful husband and devoted father.

The next time you watch Christmas in Connecticut (1945), appreciate Dennis Morgan’s genuine care and skill with the various babies in the film [aff. link].

It’s not just an actor pretending: when Dennis holds a baby, changes a diaper, or takes over the bath time routine from Barbara Stanwyck’s struggling Elizabeth Lane, his experience shines through. 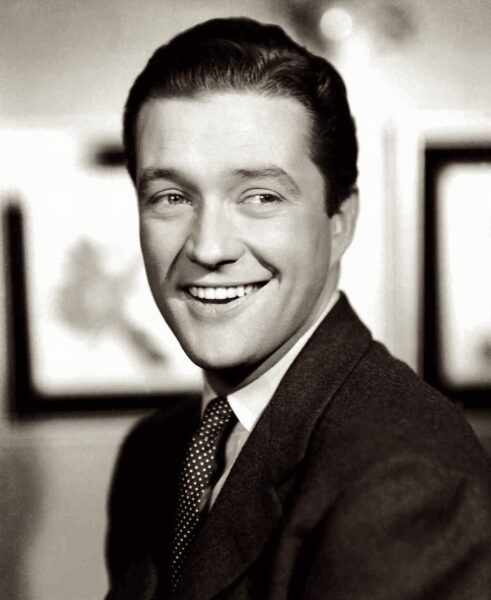 This real-life father knew what he was doing.

4. What actor was meant for the Danny Kaye role in White Christmas (1954), but had to drop out after contracting Q fever?

While it’s true that Fred Astaire was first offered the role, the correct answer to today’s question is Donald O’Connor.

After a breakthrough performance in 1950’s Francis—the story of a soldier befriended by a talking mule, Donald O’Connor was contractually obligated to make one Francis film a year through 1955. 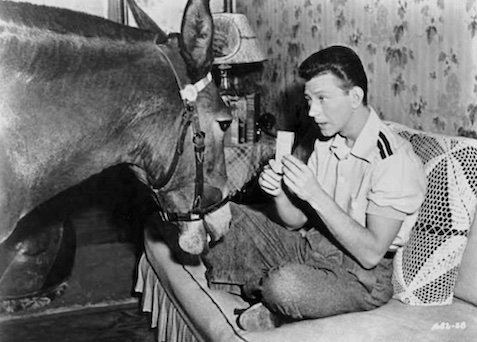 Unfortunately, Donald contracted q fever from the mule during filming of the 1953 Francis installment.  He was too sick to make White Christmas, and had to be replaced.  As O’Connor remembered:

“Bob Alton [a White Christmas choreographer] had already put a lot of the choreography together for me, but I got this strange disease and the doctors couldn’t diagnose it and it turned out to be q fever.  They waited two months for me.  I was terribly disappointed.  And Danny Kaye made twice the money I would have gotten and he got a piece of the picture.  You can see that the [dance] movements used [in the film] look like something I would have done.”

Though it’s hard to picture anyone but Danny Kaye in the Phil Davis role, Donald O’Connor had proved himself an ideal dance partner for Vera-Ellen in the previous year’s Call Me Madam (1953).

No doubt, the teaming of Donald and Vera-Ellen could have elevated the dancing in White Christmas to even greater heights.

Thanks for Reading, Listening, and Playing

Thanks for reading and listening, and for all those who participated in the week before Christmas trivia, thanks for playing! 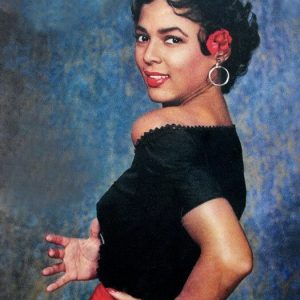 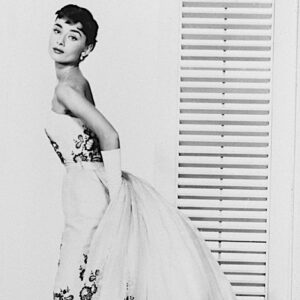 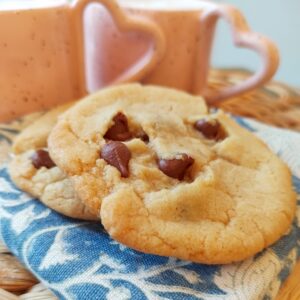 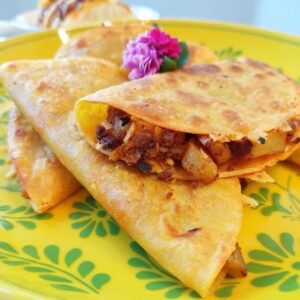 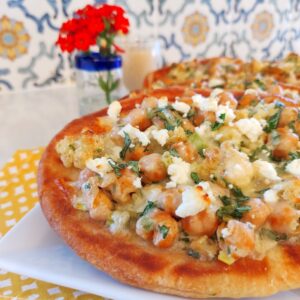 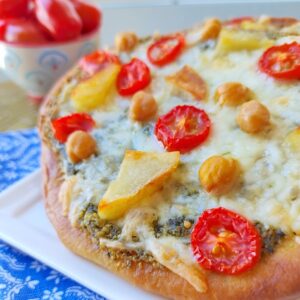